Just one New Priest can make all the difference

Kelvin Asogwa is a Seminarian in his fourth year at the Bigard Memorial Seminary in Enugu. He grew up in a family who weren’t practising Christians. But his desire to serve poor, sick and vulnerable people was present from an early age.

As he grew up, Kelvin became increasingly aware of the suffering of people around him. He was ‘tormented’ by the poverty-stricken conditions his fellow Nigerians were forced to live in. He told us that he has a special devotion to St Vincent de Paul, saying:

‘the first day I heard the name of this saint I thought he was called St Vincent de Poor and that alone made great impact on me!’

Fr Albert Ikpenwa, the Rector of Bigard Seminary, tells us: ‘Bigard has seminarians from 17 dioceses and nine religious congregations. Our formation staff are men and women of integrity who are able to transform the seminarians into better instruments of God, not just through their lectures, but also through their example.’ 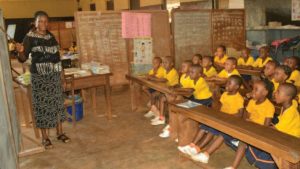 The seminary currently has 834 seminarians studying for the priesthood. In the grounds is a primary school for local children. The seminarians assist the school as part of their pastoral duties. The school population, as with the seminary, continues to grow.

But the projects don’t stop there. Fr Ikpenwa says:

In its desire to be self-sufficient, the seminary has also initiated the Bigard Press, the Poultry, the Piggery, the Canteen and the Book shop. These provide services to the seminary community and the general public, thus reducing our expenditure and increasing our income

With your help, these things are possible

But  despite all the amazing work it does, Bigard seminary cannot currently cover all the costs associated with training new priests. But with your help, Missio ensures that no religious vocation in a mission diocese is turned away through lack of funds.

Individually or as a group, by giving £42 a month, you can ensure a seminarian’s place at seminary. £2,000 will pay for his final four years of training.

By sharing the gift of faith, you bring a real, lasting difference to those in need, investing in the future leaders of our Church. Here are just some of the seminarians your donations are helping to support.

The Bigard family remains grateful to Missio’s SPA and its supporters and sponsors. Your support has been of immense help in the day-to-day running of the seminary. Without you, things would be very difficult for us. The Bigard Family offers daily prayers to you and all our benefactors.

When asked about his calling, Kelvin explains that he feels compelled by his love for God to help people in need not just practically, but in their spiritual and pastoral needs too. Once he is ordained, Kelvin says he hopes to ‘serve the poor and rejected in society’.

You can help today

Thanks to people like you, Missio can ensure that no religious vocation in a mission diocese goes unfulfilled. Find out more about the SPA, make a donation, or see how you can become a sponsor for a priest of tomorrow.