Paolo Manna was born in 1872 in Avellino, Italy. He was one of six children. Paolo’s mother died when he was only two years old.

Paolo studied in Avellino and Naples, then later in Rome from 1889. In 1891 he followed in the footsteps of his older brother and two of his uncles and began studying for the Priesthood in Milan. On a pilgrimage to Lourdes the same year he asked the Virgin Mary not for his health but to love Jesus and give his life to extending the Kingdom of God.

Paolo was ordained in May 1894. He left the following year for the missions at Toungoo in Mayanmar. He stayed in that mission until July 1907. But sadly, Paolo suffered with bouts of tuberculosis and was forced to return to Italy on three separate occasions.

Continuing the mission at home 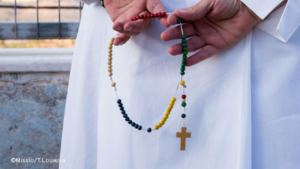 Paolo’s poor health caused him to call himself a ‘failed missionary’. But his mission was in fact far from over. Back in Italy, he began to promote and support the missions far and wide. In 1908 he became the editor of a magazine called Le Missioni Cattoliche (The Catholic Missions). The following year, as director of Le Missioni Cattoliche Paolo began bringing a missionary dimension to almost every issue, by promoting missionary books, pamphlets, calendars, appeals for missionary vocations and exhortations to pray for missionaries.

Paolo promoted the Societies for the Propagation of the Faith and the Holy Childhood (now Mission Together) in dioceses and parishes across Italy, as at that time they were still mainly only known in France.  In 1914 he started publication of “Propaganda Missionaria” which became a popular broadsheet newspaper.

In 1916 Paolo established a religious movement in order to promote and foster greater knowledge for the missions. This congregation spread rapidly, and in 1919, Pope Benedict XV recommended its presence in all dioceses in his apostolic letter Maximum Illud. The same year, Paolo also founded “Italia Missionaria” – an organisation for young people to learn about the missions.  He founded a college for seminarians to foster vocations to the missions.

A lasting legacy of prayer 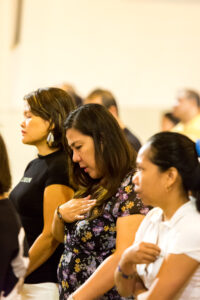 From 1924 to 1934, Paolo served as the Superior General for the Pontifical Institute for Foreign Missions (PIME) in Milan. In 1926 Pope Pius XI brought the Milanese PIME together with a branch in Rome to form a more universal collective.

In 1927, Paolo set out once again on mission, undertaking a long trip to the missions in both Africa and the US. In 1943 he established the magazine “Venga il Tuo regno”.

Paolo Manna died in Naples on 15 September 1952, from complications following an operation. But his legacy lives on. The missionary union he founded received the title “Pontifical” from Pope Pius XII in a 1956 decree.

Today we continue the work of the PMU through Missio. We aim to help you on your own personal journey to a greater understanding of mission, and we are part of prayer and mission networks which encircle the whole world!

Find all the ways to pray with Missio here>>

The National Course is a collaborative project between Missio and the Catholic Missionary Union (CMU), for pastoral ministers from overseas, working in England and Wales. You can find out more about it here>>