Recently, our Mission Rosary focus for Asia was a prayer of thanksgiving for the work of Religious Sisters around the world, who are working to end human trafficking.

Every year, hundreds of thousands of vulnerable people – overwhelmingly women and children – are trafficked. This horrific form of modern-day slavery has to stop. And the global Church is at the forefront of the fight against it.

The Church: just where it’s needed

Talitha Kum is a global federation of Religious Sisters committed to combating and eradicating human trafficking. The Rome-based organisation has hundreds of connections and networks around the world.

In Asia, Talitha Kum partners with 65 Catholic organisations, 56 non-governmental organisations (NGOs), 18 national organisations and 42 international government agencies. And in that continent alone, as many as 26,065 women were prevented and rescued from human trafficking in 2021.

Sr Abby Avelino, Director of Talitha Kum Asia, reflects on their work in 2021:

‘Prevention was the Asian networks’ priority. It was fostered through training and awareness-raising campaigns in schools, parishes, and local communities, targeting especially women, youth, religious, tribal communities, and migrant workers’.

Human trafficking and exploitation happens all over the world, including in the United Kingdom. It is at its strongest in areas where people are socially or financially vulnerable, forcing them into increasingly desperate measures for survival.

Many countries in Asia, such as Myanmar, Sri Lanka and Pakistan, face severe economic crises largely due to the impact of the COVID-19 pandemic and political instability. Sr Abby told Fides News Agency:

‘Crises like these increase the number of people who become vulnerable to trafficking, particularly women, girls, young people, migrants, and refugees. The predominant forms of domestic and international human trafficking are forced labour, forced marriage and sexual exploitation’.

Protection and support in India 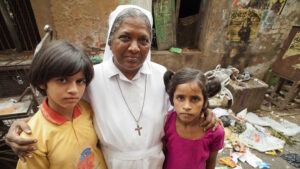 The work of Talitha Kum is a vital part of the Church’s work to bring about a fairer world, rooted in the dignity and sanctity of each and every one of God’s children.

As part of the global Church, Missio works directly with the survivors of all of these crimes, as well as working with communities to prevent them happening to begin with.

In India, child trafficking and child labour is the reality for around 12 million children – a staggering figure. But Sr Clara and her Order, who previously featured in a Missio World Mission Sunday campaign, work to rescue young girls from forced labour and exploitation. They protect and educate vulnerable young girls, giving them the safe space and the skills to break free from exploitation and abuse. Through their devotion and faith, the Sisters help the children to see their worth as a beloved child of God:

‘We always give them confidence that Jesus loves them’.

Read more about Sr Clara and her vital work>>

Hope for the future in Nairobi

In many parts of Kenya, an already challenging situation is made worse due to extreme poverty: meaning a severe lack of food, shelter, education and employment.

Young girls trying to make a living are easily trapped into prostitution and sexual exploitation. Vulnerable and destitute, many are orphans or come from abusive relationships at home. And local social services offer little in the way of support. So it’s our responsibility, as a Church, to be a voice for the voiceless.

With your support, Missio is funding the Cardinal Maurice Otunga Empowerment Centre for Girls, strengthening and educating them, and rescuing those who have already become trapped in that cycle of exploitation.

Read more about how your donations help in Kenya>>

The Holy Father’s cry for justice

Human trafficking is a devastating, complex and increasingly rife problem in the modern world. Described by Pope Francis as a ‘crime against humanity’, this organised and global crime trades both adults and children for money.

Calling on Catholics around the world to pray with him for the victims of trafficking, his Holiness said:

Into this horrendous situation, the global Church can pour hope, justice and rehabilitation. The problem is huge, but so is the number of people trying to fix it, and that number is growing every day. You can join the solution, today.

Will you stand with the Church and with Missio to protect and rehabilitate our sisters and brothers around the world?