This year during Advent, we asked Missio supporters to share their Nativity scenes and what each one meant to them. We had some wonderful responses from all over England and Wales – thank you so much for sharing your traditions with us! Linda, a retired teacher and Red Box Collector from Warwickshire, shared this special story of an over30-year tradition: 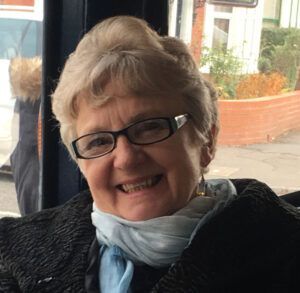 I have several Nativity scenes in my house at Christmas, and all have special significance to me. But perhaps the most special is this one, which goes up in my window each year.

The story of this Nativity scene begins at Christmas in 1977. I was teaching the top class of my village primary school and for an art project the class created a huge nativity scene to display in school. They made each piece from mosaic squares cut from coloured magazines. They worked so hard on it and were really proud of it when it was finished.

When it came to the end of term, it was difficult to return the art to each creator as they had all worked in groups on each figure of the crib scene. I was so proud of the children’s efforts, and I could see they didn’t want to take it down. So instead of trying to share it out or just throw it away, I offered to take it home. At the time, we lived on the main road right at the edge of the village, and everyone drove past our house, so I knew if I put it up in our top window, everyone would be able to share in it.

The children all agreed this was a good idea. So that’s what we did. They were thrilled to see their work displayed that way, so the next year I put it up again. In fact, putting up the crib became part of our family Christmas tradition, with my own children joining in as they got old enough.

We put it up every year for 28 years! It became a bit of a landmark in the end. I’m pretty sure many of the original artists brought their own children to see it over the years.

We moved house in 2007, so that was the last time the Nativity scene was displayed. Our new house was a bit more tucked away at the other end of the village. I did give the crib scene to the new owners of our old house. I explained how it had become a tradition to share it with the village; as they had young children I hoped that they’d continue to put it up. But sadly they didn’t and I couldn’t get it back. That was a bit heart-breaking.

A new window, and a new start

But then last year, knowing what the crib meant to me, one of my daughters and her little girls created a new Nativity for the window in my new house! I was so delighted. And so the tradition starts again. In a small way, the Nativity Scene has become part of my personal faith mission; to keep Christ front and centre during Advent and Christmas.

It’s only a small thing, but I always think: You never know. You never know when a small act will inspire someone or give them hope.

I’ve been volunteering for Missio since 1984, and I have so much admiration for the amazing work missionaries do. My contribution is just a little bit, but it’s lots of little bits that add up to big changes. When I think of how missionaries go everywhere they are sent and live in the communities they serve, it brings to mind my favourite passage from the Old Testament, Ruth 1:16:

‘Where you go I will go, and where you stay I will stay. Your people will be my people and your God my God’.

Missionaries have such courage and love to go and just be with people, wherever they are needed.

A huge thank you to Linda for sharing this lovely story!

We’ve put together a little film of some of the Nativity scenes you shared with us this Advent. Have a watch and if you enjoy it, please say a prayer for our work and perhaps put a coin in your Red Box!

We wish all our supporters and volunteers a joyful and peaceful Christmas.