Where there is hatred, sow love 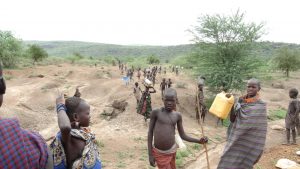 The conflict continues; more and more people are hungry, homeless and terrified. South Sudan is on the brink of collapse, but with Missio’s support, Bishop Paride Taban is trying his utmost to bring peace to his people.

Devastatingly, the South Sudanese have lived with conflict for most of the last 40 years, with the majority unable to recall a peaceful existence. The crises in South Sudan have gained international attention, with the Holy Father imploring the faithful to do what they can to support their sisters and brothers in need.

The crippling effects of economic and political instability have meant that many people have been displaced both internally and externally; forced to seek refuge in church grounds, UN sites and neighbouring countries.

Despite the many obstacles, Bishop Paride Taban is making a vital contribution towards encouraging a peaceful South Sudan: ‘with one hand holding God and with the other hand holding humanity,’ he explains.

This humble, gentle man was a diocesan bishop throughout the civil war which gripped Sudan from 1983 to 2005. He supported his community, both practically and spiritually. He kept communications open with people on all sides of the civil war. And he was instrumental in instigating independence for South Sudan, which became the world’s youngest nation in 2011.

Despite this victory, Bishop Paride recently told us : ‘All of the war has been waged because of lack of education. People are not educated and do not accept each other as brothers and sisters because of tribalism.’

And now, sadly, in addition to the violence the threat of famine has become a reality and people who are ‘safe’ are starving.

Please help Missio support Bishop Paride and everyone who reaches out with God’s love to the world’s most vulnerable people.

Making disciples of the whole world

In an effort to support people and encourage them to live as equals, Bishop Paride retired as diocesan bishop and embarked upon creating a ‘Peace Village’ in Kuron. He knew that the different tribes in this area were clashing and had no access to education, healthcare or the Church. 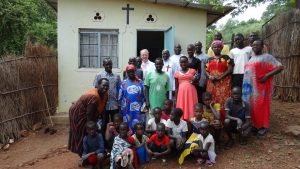 He says, ‘My mission is to make disciples of the whole world; to make everyone into the image of God.’

Many South Sudanese who live on the land have done so for centuries and have no experience of clinics, schools and the infrastructure that we take for granted. According to a local priest, this current conflict is worse than the previous civil wars. Tribes are turning on one another in desperation and they are using guns. And the violence is escalating, as now tribes are not just stealing cattle, they are kidnapping children.

There is no local law enforcement in the area, so the Peace Village has set up a peace office. When John’s abduction was reported, the office immediately circulated the information to surrounding communities, including rival tribes.

For five days, the Kuron community searched for John. People across the area were on alert to look for the child and roadblocks were enforced. John’s mother was in utter despair; unable to eat or sleep. At the time she said, ‘By taking my child you have destroyed me.’

On the fifth day, a soldier travelling towards Kuron from an army camp almost 100 miles away was asked if he knew anything about John. He said a child had been found by a group of soldiers. They had come across some ‘wildlife people’, who ran away, leaving the boy behind. John told the soldiers he was from Kuron and when they asked him who he knew there, he simply said ‘Bishop’.

As soon as the news reached the Peace Village, John’s father and a village peace worker rushed to the army camp. To make sure they knew him, the soldiers put John with 15 other children and asked his father which child was his son. John’s father broke down in tears as soon he saw John and ran to embrace him. 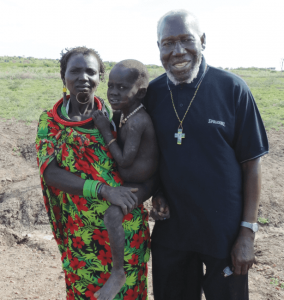 A beacon of love

‘Without the Peace Village, our child would have disappeared,’ says June. ‘Although I am filled with anger for the people who did this to my child, I know we must learn to live alongside the communities around us. The Peace Village is helping us to do that. I don’t want anyone else’s child to be taken. No one deserves that.’

The tribes in this area do not get on with one another. Members of one tribe will often steal cattle from a rival tribe; often by force. This has been happening for centuries, but now children are being abducted too. Previously, the wronged tribe would launch a counter-attack immediately, either by stealing cattle, or one of the other tribe’s children, if not something worse.

But the local chief in Kuron says, ‘Thanks to the Peace Village, we now know that we need to establish the facts first and find out what has happened, rather than jump to conclusions. God has given Bishop Paride a call to establish the Peace Village. Now he is a beacon and an example to all other people in South Sudan to make similar communities. Bishop Paride has a great love in his heart and shares God’s love with us all.’

The Peace Village conducts workshops to help bring together people from each of the tribes to encourage them to get to know one another and to try to understand one another. They also have a monitoring team to find out what is happening in the local area to ensure they have the facts, not hearsay, about issues in the communities.

Trauma counselling, a health clinic, a nursery and primary school and a vocational training centre can all be found in the Peace Village, with the aim of reaching out and supporting those in greatest need. Bishop Paride tells us: ‘Now this village is used as a model, but we need funds to create a Peace Academy, so that we can roll out this model across the country.’

The concept of the Peace Academy is that when people attend, they are personally transformed through Gospel teachings and are then encouraged to reflect how and what they may do in their own community to help build peace. At Kuron it is very much the local Church leading the way.

How you can help 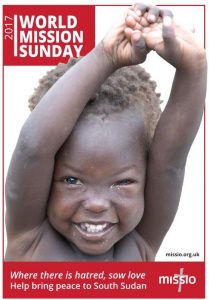 On World Mission Sunday on 22 October 2017, Missio will be encouraging the faithful of England and Wales to ‘help bring peace to South Sudan’ through your prayers and financial support.

World Mission Sunday is your chance to support missionaries and the Church in proclaiming the Gospel of peace to those who suffer throughout the world. By supporting the Pope’s worldwide collection you will be helping to fund the spread of peace through faith and outreach projects, supporting Catholic missionaries and building new churches.

With your help, Missio, the Pope’s official charity for overseas mission, works to answer the call to love God and to love our neighbour by bringing the hope of the Gospel where there is turmoil, poverty and uncertainty in the world. By supporting Missio you will be sharing the peace and love of Christ with all people by helping everyone in need, regardless of background or belief.

Where there is hatred, sow love; help bring peace to South Sudan