It is with great sadness that we report that Fr Cosmas Omboto MHM was killed yesterday (21 November) outside the church where he served in Cameroon. May he rest in peace. 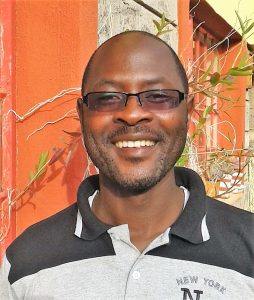 Fr Cosmas (right) was a Mill Hill Missionary from Kenya and had been in Cameroon for eighteen months.

Please join us in praying for Cosmas’s family and his fellow Mill Hill Missionaries. Please also pray for peace in Cameroon.

There follows the official obituary of Fr Cosmas Omboto MHM

Cosmas was born to Charles Omboto Nyatigo and Chrispinah Penina Nyansiaboka on 19th September 1985 in Gucha, Kisii, Kenya. He had three brothers and four sisters. He was baptised on 21st January 1989 in the parish of Sengera. After his primary education he went to the Matagaro SDA Mixed Secondary School where he obtained the Kenya Certificate of Secondary Education in 2005.

In 2007 he joined the Basic Formation Programme in Luanda and subsequently proceeded to our formation house in Jinja, Uganda, where he studied Philosophy until 2011. He went on to our Mill Hill Formation Centre in Nairobi and studied Theology at the Tangaza College University there.

He took the Perpetual Oath on 21st May 2016 in Kisumu, Kenya, and was ordained priest last year on 25th March by Bishop Joseph Mairura Okemwa of Kisii diocese. The ordination took place at Sengera Catholic Parish where he had also been baptised and received the sacrament of Confirmation. 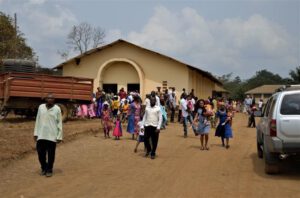 Cosmas did his Missionary Experience Programme in Fundong parish, Bamenda, Cameroon, where he dedicated his time to visiting the sick, the youth apostolate and leading prayer services. In October 2016 he received an appointment to the Diocese of Mamfe which he took up shortly after his ordination.

Yesterday, 21st November, Cosmas was standing outside his church (right) while meeting refugees. At that moment a vehicle entered the church compound at high speed. As they drove by, they started shooting. At this the refugees fled into the church. Cosmas was still outside when he was hit in the thigh and chest. He was taken to hospital, but on arrival there pronounced dead.

For more than two years now, the political situation in Cameroon has been very volatile. Many people have already lost their lives as a result of violent outbursts.

In the final recommendation for his Perpetual Oath his rector wrote about Cosmas: “He is a man of peace and will seek ways of keeping people together and resolving issues in an amicable way.”

This was also the experience of people who knew Cosmas recently, who say that he was a calm, soft-spoken and confident person. Apparently he was very happy with his parish priest, Fr. Tiberius Vuni, who despite the challenges of the tense situation in the country, continued to offer good leadership. Fr Tiberius was very appreciative of Cosmas, his assistant priest, and found him very supportive.

Cosmas had shared recently, that he found the situation in Cameroon quite scary.

May Cosmas rest in peace in the eternal embrace of God.