This Sunday is the fifth annual World Day of the Poor. Pope Francis established this day in 2016 to amplify the needs, hopes and experiences of our sisters and brothers who live in poverty.

The poor you have always with you

The theme for this year comes from Mark’s Gospel: ‘The poor you have always with you’. In his message, Pope Francis discusses the story of the woman who poured precious ointment on Jesus’ head. The disciples were indignant at what they saw as a waste of money:

‘Why was this ointment not sold for three hundred denarii and given to the poor?’

But for Christ, the woman’s actions are a significant moment of understanding and empathy. Pope Francis says:

‘That nameless woman, meant perhaps to represent all those women who down the centuries would be silenced and suffer violence, thus became the first of those women who were significantly present at the supreme moments of Christ’s life: his crucifixion, death, burial and resurrection’.

In this passage, Christ shows the dignity of the woman. And the role she plays is neither small nor insignificant.

Missionaries live and work in some of the world’s poorest communities. Please pray for their vital work, and consider a donation to Missio today>>

The power of sharing

What this shows us, he explains, is that poor people ‘always and everywhere, evangelize us, because they enable us to discover in new ways the true face of the Father’. Pope Francis powerfully reminds us that:

‘The poor are not people “outside” our communities, but brothers and sisters whose sufferings we should share, in an effort to alleviate their difficulties and marginalisation, restore their lost dignity and ensure their necessary social inclusion … Almsgiving is occasional; mutual sharing, on the other hand, is enduring. The former risks gratifying those who perform it and can prove demeaning for those who receive it; the latter strengthens solidarity and lays the necessary foundations for achieving justice’. 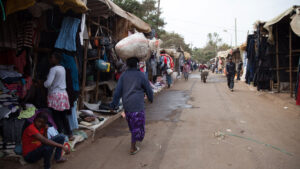 Sharing with those who are materially poor is no new concept to missionaries. Fr Bonaventure, Missio’s National Director in Kenya found this approach revolutionised the work of missionaries in Kibera, Nairobi’s largest urban settlement. He told us:

‘Priests used to visit to do pastoral work, visit the sick, celebrate the sacraments in the Small Christian Communities and afterwards, in the evening, they would go back to their parish.

This arrangement did not sit well with the people: Priests never connected with the situation in the slum, nor did the people connect with the Priests. This feeling of being regarded as strangers among the people they served challenged the Priests to take action.

So, they came to live closer to the people and stayed with them in their situation. They were able to learn the language of the slum and so speak to them in a language that endears to the heart. They experienced the challenges’.

On the World Day of the Poor, Pope Francis exhorts the faithful to share with and learn from all people:

‘None are so poor that they cannot give something of themselves in mutual exchange. The poor cannot be only those who receive; they must be put in a position to give, because they know well how to respond with generosity. How many examples of sharing are before our eyes! The poor often teach us about solidarity and sharing. True, they may be people who lack some things, often many things, including the bare necessities, yet they do not lack everything, for they retain the dignity of God’s children that nothing and no one can take away from them’.

We cannot know what we do not witness

Fr Benedict Eugene OMI has worked among plantation workers in Sri Lanka for many years. Immersing himself in their experiences has given him vital insight into the challenges many of them face – insights which faraway government officials and policy makers can miss. He shared with Missio the dire poverty that many plantation workers face. Many of them have worked their whole lives on the plantation. But they are left destitute when they become too old or sick to continue. He says:

‘People living on the estate are under estate management and depend on them for everything. However, even basic needs are not met. Government authorities presume estate management are looking after these people… but hospitals are far away and pregnant women, children and the elderly face many problems. Unnecessary deaths are very common and normal in the plantation sector’.

Ultimately it will always be better to listen rather than tell, and experience rather than listen. This is why Missio supports missionaries living in the communities they serve, and also why the communities themselves tell us what they need and we strive to meet those needs. It’s vital – and increasingly so as the global landscape continues to shift and shape around new threats – that we learn from each other. As the Holy Father says:

‘A different approach to poverty is required. This is a challenge that governments and world institutions need to take up with a farsighted social model capable of countering the new forms of poverty that are now sweeping the world and will decisively affect coming decades. If the poor are marginalised, as if they were to blame for their condition, then the very concept of democracy is jeopardized and every social policy will prove bankrupt’.

On the World Day of the Poor, we pray for all our sisters and brothers living on the knife edge of poverty.

We pray for the courage and compassion, that we may meet them where they are, see in them the face of Christ, and ensure their voices are heard.

If you can, please consider a donation to Missio to support communities living in poverty.