Vocations are flourishing in many developing countries. Fr Fons Eppink MHM shares about his visit to the Mill Hill Formation House in Cameroon.

37 students are enrolled in a formation programme at the Mill Hill Missionary Formation House in Bamenda, Cameroon. Pastoral work is an essential part of the formation programme. Students must perform a month’s pastoral placement during their holidays and visit local parishes for various duties on weekends.

‘You must meet the students to listen to their experience of pastoral work… You’ll come away inspired,’ I was told when I arrived in Bamenda.

Stepping out of the comfort zone

Understandably almost everyone speaks of an initial sense of unease and even fear. ‘How will I cope in this new and unfamiliar environment?’ Cameroon is a multi-coloured quilt of widely differing tribes and assorted languages, cultures and types of food. For most students, the pastoral placement means stepping right out of their comfort zone.

Felix shares that he was sent to a village where he was put up with a family whose living conditions were less than basic. He was appalled that the room he was given to stay in was squalid and smelt terribly. The food tasted unfamiliar and was quite unpalatable. He felt totally out of place and was sorely tempted to do a runner. But he persevered. What was it that kept him there? Sheer bloody-mindedness and the inspiration of the Bible!

The instructions the students receive when sent on their mission echoes the story of the sending of the 70 disciples in the gospels:

Do not suppose that you know everything. Be aware that Christ has gone ahead of you. Discover how Christ operates in the hearts of the people you meet.

It is clear that everyone in his own way has passed through a steep learning curve. The shy and timid have been challenged to come out of their shell. All have grown in self-awareness and ability to listen; their hearts have expanded.

Your donations help make this work possible. Please donate to the APF today>>

Learning to walk with others

Some tell of particularly challenging experiences. Ronald shares how he was assigned to a school for physically-challenged pupils, mostly orphans. His initial reaction to working with blind or deaf youngsters was one of considerable unease. He felt totally unprepared and helpless, but gradually he learnt to just be with them and ‘walk’ with them: ‘In the end I did not want to leave,’ he says wistfully. 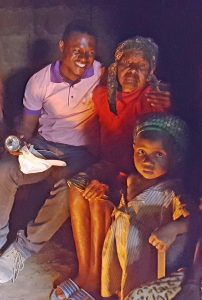 Brian recalls how one day he was called to the bedside of a very sick man. He went accompanied by some catechumens – they prayed over him and soon after they left, the man died. When Brian heard the news, he was overcome by fear. Would he be implicated in this death? The catechumens had told him of a priest who had a similar experience and was subsequently accused of ‘having killed’ the person (such accusations are not uncommon within the context of traditional African beliefs).

A few days later the wife of the deceased came looking for Brian. He was so afraid, he hid in his room. Later, he managed to calm his inner panic and went to visit the family. To his utter amazement and grateful relief, rather than blaming him for the death of their beloved, they thanked him for having accompanied him in his final hours.

Acknowledging our own humanity

Others report how they often have to resist being put on a pedestal by villagers who tend to look up to them or attribute to them knowledge they do not possess. Alternatively, some of them are not made to feel welcome when they move around a community to visit people at home.

Sometimes they find themselves challenged in their very vocation. What do you do when you receive a marriage proposal? With some humour one of the students shares his experience of being propositioned twice during his stay in a particular village community.

To love and to serve

I find myself inspired and impressed by the joy I sense in these young men and also in their identification with what they perceive as a typical Mill Hill missionary approach: take people where they are and accompany them to where the Gospel invites them to go. To love and to serve.

Your support makes all the difference

In England and Wales, the Mill Hill Missionaries work with Missio through the Red Box to support faith communities and share the Gospel throughout the world. By donating to the Red Box / APF, you enable more MHM students to fulfil their vocations, reaching and living alongside the world’s most vulnerable people. Thank you.

You can read more about MHM and all of Missio’s work in the latest issue of Mission Today Magazine.