The journey of a chalice

Decades ago, a chalice was gifted to a young English priest about to set sail for the distant lands of Uganda. Here we learn about the chalice’s remarkable ongoing journey

Jim Daley and Tommy O’Neill’s friendship began when they were growing up together at St Philomena’s School,  Middlesbrough. They attended St Philomena’s parish, and  as young men, they both felt God’s call to the priesthood. While Jim Daley trained at the St Joseph’s Missionary Society (Mill Hill Missionaries), Tommy O’Neill trained as a diocesan priest, but later left to get married.

Fr Jim Daley MHM was ordained on 10 July 1960 in Mill Hill, London. A couple of days later, Tommy gave Fr Jim a beautiful chalice, which he used to celebrate his first Mass in his home parish of St Philomena. ‘It was in front of loads of friends and family; it was a big ‘do!’ Fr Jim explains.

Soon after, Fr Jim set out to share his faith and the love of God with the people of Uganda. Taking his chalice with him, he set off from England. He travelled by passenger ship and three weeks later encountered the wonder of Mombasa, Kenya.

‘It was all new,’ Fr Jim says. ‘We landed in Mombasa and then took the “Uganda train” at 7pm, arriving in Tororo at 3am the following morning, in the dark.’

Fr Jim was appointed by Bishop Grief MHM to the ‘very poor’ mission of Amolotar village, right at the edge of the Tororo diocese. A small church, a school, fifteen outstations and a welcoming community made up the mission and Fr Jim set about learning Lango, the local language. He’d sit in the children’s catechesis classes, listen and try to keep up. Fr Jim wanted to celebrate Mass in a way that was meaningful for the community. So whenever he celebrated Mass he would use the chalice he’d been given:

‘Every time I used that chalice, I thought of Tommy and his family. I used it for every single Mass and took it with me everywhere – even on safari!’

When Tommy died in 2006, Fr Jim conducted the funeral Mass, using the chalice that had been gifted to him so long ago. During the funeral he told everyone why the chalice was being used and why it was so special. ‘He’s the best friend I’ve ever had,’ Fr Jim recalls.

‘He was the youngest of a big family and had two older brothers. I was like the brother he never had as I was closer to his age. As boys, we were always out, roaming the hills. We were always together.’ 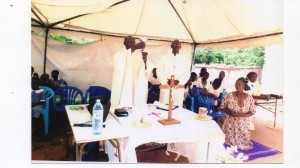 Once Fr Jim retired, he asked that the chalice be given to a newly ordained priest in Uganda. Fr Michael Oluka received the chalice on 3 September 2015 on the feast of St Gregory. He wrote to Fr Jim two days later:

‘I am greatly humbled to have the privilege of being the beneficiary of the Holy vessel (chalice) which you donated… Due to the joy I was compelled to celebrate Holy Mass using the chalice in thanksgiving to God… My father is a Eucharistic Minister who at one time served his parish under your leadership as parish priest. Thanks be to God that I joined the seminary after inspirational stories that my father narrated to me about your good priestly conduct… I promise to use this gift during the celebration of the Holy Mass only and always, unceasingly.’

Fr Jim is still in contact with Tommy O’Neill’s family and says,

‘This family, out of love, gave me a chalice. This chalice is now being used for Mass and celebrating the love of God. Out of love that chalice was given and they will receive that love of God through the Mass, wherever the chalice is.’

How you can help

The APF assists every one of the Catholic Church’s 1,069 mission dioceses. Please help priests like Fr Jim and Fr Michael bring Christ’s love to the world.